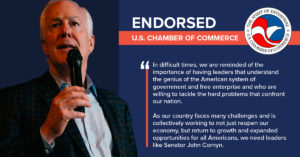 [Excerpts below. Full article as published in the Dallas Morning News available here.]

WASHINGTON – The U.S. Chamber of Commerce, aiming to avert Democratic control of the Senate, threw its support to Texas Sen. John Cornyn on Tuesday.

That’s no surprise. The three-term Republican is a reliable ally for business, with a 90% lifetime rating from the chamber.

“We like his good strong pro-business conservative message. But we also know that we’re in a complex environment right now with the coronavirus and the economy,” said Scott Reed, the chamber’s chief political strategist. “The good news is the election’s not today….We need Texas in the safe category by Labor Day so we can focus on some other states.”

“Cornyn is in a very strong position,” Reed said, and that’s regardless of which Democrat wins the July 14 primary runoff between state Sen. Royce West of Dallas or former Air Force helicopter pilot MJ Hegar. “We’re big supporters…. He’s a conservative. He’s a problem solver. And he’s like the mailman — he delivers.”

“We’re prepared to turn out the business community, no matter who his opponent is,” he said.

For the business community, loss of the Senate could mean major setbacks on regulatory reform, taxes, and energy policy – areas in which the chamber has been pleased with the Trump administration.

The Cornyn endorsement won’t come with ad buys or donations, at least not right away, though the incumbent doesn’t lack for resources. But the chamber will remind its members of Cornyn’s support on its agenda, most recently on the CARES Act and Paycheck Protection Programs enacted to mitigate shocks from the pandemic.

Reed lauded the senator for “leading the charge on liability reform in the next legislative package”—a top priority to protect companies from potential lawsuits if workers or customers develop COVID-19 as the economy reopens.